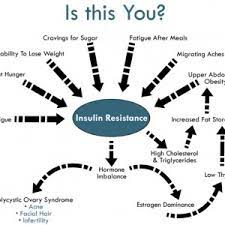 The most common cause of infertility in the United States today is polycystic ovary syndrome. PCOS is a metabolic condition in which insulin and testosterone elevations disrupt pituitary feedback loop coordination. Insulin resistance appears to play a major role in the development of PCOS.

There is no successful treatment for PCOS in traditional medicine because they do not treat the root cause of PCOS. Traditional medicine goals are based on your symptoms, or whether or not you want to become pregnant, and lowering your chances of getting heart disease and diabetes. Functional Medicine involves understanding a complex series of vicious cycles that feed each other occurring with PCOS in your body. Then identify and provide nutritional support and education to unlock these vicious cycles to prevent their reoccurrence. Insulin resistance plays a major role in a vicious cycle that alters female hormone metabolism toward androgen dominance. Androgen is the generic term for any steroid hormone that stimulates or controls the development and maintenance of masculine characteristics. They are also precursors of all estrogens, the female sex hormones.. Androgen dominance may eventually lead to PMS, Polycystic Ovary Syndrome (PCOS), Endometriosis, ovarian cyst and tumours. PCOS is the most common female hormone disorder in menstruating women. PCOS is primarily characterized by hyperandrogenism, insulin resistance and chronic menstrual irregularities. Estrone is produced by the fat cells from the conversion of the androgens. This type of estrogen promotes the storage of fat around the middle. Symptoms of androgen disorders tend to appear gradually over a number of years and range from mild to serious. They include:

Insulin resistance is associated with estrogen proliferative cancers, acanthos nigricans ( darkening of the skin, age or liver spots) increased cardiovascular disease and elevated cholesterol/triglyceride levels. Insulin resistance causes high cholesterol/triglycerides and sludge to build up in the liver, which must be cleared to restore proper hormone elimination. Cholesterol and triglycerides is a by-product of your body’s efforts to provide your cells with glucose. Only 15% of cholesterol and triglyceride levels are related to diet. Androgen dominance plays a role in the cycles in its impact on insulin resistance. Excess androgens increase levels of free fatty acids which inhibit the liver detoxification and skeletal muscle from using glucose. These metabolic pathways create a vicious cycle of elevated insulin which is fed and feeds androgen formation. Insulin resistance and androgen dominance seriously impair your body’s ability to eliminate toxins, free radicals and excess hormones. This results in ever-increasing levels in your body of the things your body is attempting to get rid of.

Are you ready to stop the vicious cycles of PCOS with the help of Dr Stavy?

RHEUMATISM: WHY DO I HAVE PAIN IN MY KNEE JOINTS AND HANDS?

Get all latest content delivered a few times a month.